Exodus to the lands of nomads and sedentary peoples 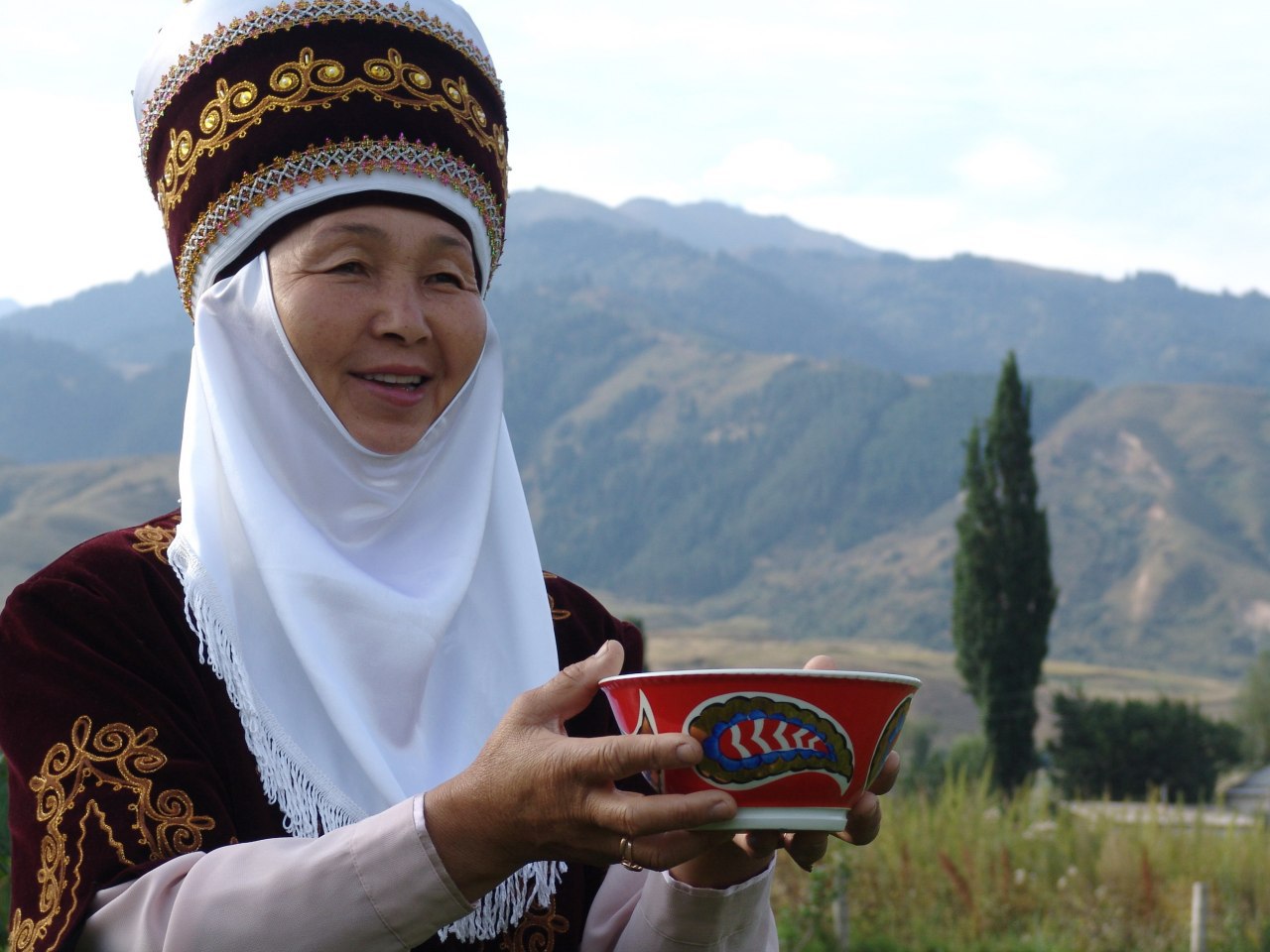 Short  sightseeing of Tashkent. Today you can see the contrast between the old and modern city. Visiting old town you will enjoy oriental bazaar Chorsu which is open daily from morning till evening. Visit of Khasti Imam complex that  includesBarakhan madrasa of XVI C, MuiMuborak library where you can see the holy book Qoran of VII C.

Morning flight to Bishkek. Afternoon arrive to Bishkek, check in to the hotel. Lunch at the local restaurant. Afternoon sightseeing  Bishkek. Todayyou can enjoy quite a number of typical soviet-style architecture (Philharmonic – concert hall, government building, Monument of the Great War heroes) and also modern monuments pointing out the traditional Kyrgyz culture (Monument of Manas, Monument of Independence). The city is famous being one of the greenest in Central Asia, due to its countless parks and alleys, which make the town a nice place to live also in the heat of the summer. Dinner at local restaurant. Overnight at a guest house or hotel.

Extras to do in Bishkek:

In the morning depart Bishkek and drive to Issyk Kul lake(250 km, 3,5 – 4 hours). Issyk Kul is Kyrgyzstan 's largest lake and at about 180 km long by 70 km wide and 668 meters deep at the deepest point, (the average depth is about 300 meters ), it is the world's second largest mountain lake – and the fifth deepest lake in the world.  The lake has been held in high regard by the Kyrgyz – it is known as the “pearl of the Tien Shan ”. Arrival to the lake, drive to Grigorevka gorge (60 km, 1,5-2 hours) full of lush green Alpine meadows and fir trees, easy hike in the gorge. Here, from the end of June until the end of September there is a collection of yurts, which offer a wide range of services. Transfer back to Cholpon Ata where you will be able to visit Petroglyphs or Open Air Museum, sometimes referred as a Stone Garden, which covers some 42 hectares and contains a number of prehistoric monumental structures (stone circles, tombs, the remains of a boundary stone wall, balbals) and stone inscriptions (dating from the II millennium BC up to the Middle Ages). Transfer to a hotel or guest house on the Northern shore of the lake. Overnight.

Extras to do in Cholpon Ata

Breakfast at the hotel. Transfer to Almaty . On the way visit Burana Tower. It is an 11th century minaret, and one of the first buildings of such type in Central Asia. Burana tower was one of the capitals of Karakhanid khanate. In Karakhanids' time new towns and settlements were developing and Burana tower, mausoleums and other buildings found after archeological excavations are the witnesses of that build up. Lunch on the way. Drive to  the Kyrgyz-Kazakh border . Border formalities. Continue driving to Almaty. Evening arrive at Almaty, check in to the hotel. Dinner. Overnight in Almaty

The name of the Panfilov Park comes after the heroes of Panfilov. Inside the park there is a big monument in commemoration of the heroic actions made by 28 Almaty Soldiers who died back in 1941 fighting against Nazi tanks somewhere near Moscow.Zenkov Wooden constructed Cathedral is one of the eight most unique wooden buildings in the world. It is one of the few tzarist-era buildings to survive the 1911 earthquake, despite the fact it is built entirely of wood and constructed without nails. Central State Museum provides an introduction to Kazakhstan's history and includes a miniature replica of the country's chief archeological treasure, the Golden Man - a warrior's costume made from 4.000 gold pieces, many finely decorated with animal motifs. In the Museum of Musical Instruments one can find various national musical instruments, the oldest of which are dated from the XVII century. Medeo is a picturesque valley located 15 km above Almaty. Besides beautiful nature there are some other attractions to see, one of which is the world's largest speed skating ring known as Medeo.

Transfer to a hotel in the end of city tour. Overnight.

In the morning transfer to the airport to board the flight Almaty-Dushanbe (1 hr). Arrival to Dushanbe. Transfer to hotel or guesthouse. Lunch.  After the lunch sightseeing in the city. SS in the city includes: Central Museum of Antiquities of Tajikistan. The highlight of the Museum is “Buddha in Nirvana” 13 meters long Buddha monument, Rudaki street, Pamir musical instruments museum, outside SS for Hissar fortress for III-IV cc BC and Medresse and caravanserai from XVI cc. Dinner in a restaurant-Tea house on the main street of Dushanbe.  Overnight in Dushanbe.

After breakfast start driving towards Panjakent. The travel goes through beautiful Varzob Gorge, and the President’s summer residence villa, through “Istiqlol (Independence)” tunnel with the length of 5,5 kilometers, the biggest in Central Asia. After driving through the Tunnel drive to Iskanderkul lake for short sightseeing and picnic lunch on the bank of famous Lake of Alexander the Great. Then drive to Panjakent along the river Zerafshan, arrival in Panjakent, sightseeing in ruins of ancient Sogdian city V-VIII Panjakent. Accommodation in B&B “Elina” Dinner and overnight.

After breakfast excursion in Republican Historical Ethnographical Museum of Rudaki, then drive through the Shakhristan mountain Pass (3378meters ) to Khujand. Lunch in  Istrafshan and then visit the well preserved old town of Istarafshan, a maze of small alleys that wind through neighborhoods of shady, mud walled Central Asian homesteads. Sights include the fifteenth century Kuk Gumbaz Mosque, the Hafz-i-Sangin Mosque and the eighteenth century Hazrat-i-Shah Mosque and mausoleum complex. Continue drive to Khujand. Dinner. Night in Khujand.

In the morning  a visit to the ancient part of Timurmalik fortress, museum and Panjshanbe market. .Lunch  in Khujand. After  lunch drive through the river Syrdarya to Tashkent. Border formalities. Drive to Tashkent.(100km).Arrival to Tashkent. Dinner. Overnight in Tashkent

After breakfast transfer to the railway station to board a high-speed train to Samarkand. Arrival to Samarkand. Drive to  the village of Khartang for the ziyara of the Mosque and Mausoleum of Imam al-Bukhari (Al-Bukhari Mukhammad bin Ismail Abu Abdallakh al-Djufi(810-870) 20 km from Samarkand). Drive to back Samarkand and lunch. Hotel check-in. Afternoon sightseeing of Samarkand. Samarkand, sometimes called the Rome of the Orient’ was already flourishing when Rome and Babylon were founded. We will visit the Observatory of Ulughbek; the site where Uligbek, grandson of Tamerlane, made some of the greatest achievements of the pre-telescope era of astronomy in the 15th century. We also visit the regal mausoleums of Shah-I Zinda, site of Central Asia’s most sacred Islamic shrine, the massive mosque of Bibi Khanym, and the adjacent colourful market. Dinner. Overnight in Samarkand. (Breakfast, lunch, dinner)

During the course of our full day tour we visit the famous Registan Square, Bibi KhanumMosque,Mausoleum of Tamerlane and the Observatory of Ulughbek; the site where UlegBek, grandson of Tamerlane, made some of the greatest achievements of the pre-telescope era of astronomy in the 15th century. We also visit the regal mausoleums of Shah-I Zinda, site of Central Asia’s most sacred Islamic shrine, the massive mosque of Bibi Khanym, and the adjacent colourful market. We’ll also visit the old bazaar for which this exotic city is famous for.

Travel to Bukhara via Shakrisabz, the birthplace of Tamerlane. We visit Tamerlane’s palace Ak Sarai, the KokGumbaz mosque, Mausoleum of Jehangir (Tamerlane’s grandson) and Tamerlane’s Mausoleum. Arrival to Bukhara. Dinner. Overnight in

Today we explore the old quarter on foot. We will visit bustling “trade domes,” active mosques, and the Kalyan Minaret (“tower of death”), one of Central Asia’s tallest. We’ll stroll around the streets and visit the old town .We also visit The Ark, a large fortress with the Emir’s open-air throne room and the Mausoleum of Ismail Samani, an intricate and beautiful 10th century brick structure that is nicely preserved. We will also visit the local market to interact with local people.

This morning we’ll also venture to the outskirts of Bukhara and visit the complex of BahouddinNaqshband, He was the founder of the Naqshbandiyatariqat. Then we will visit the summer palace of the last emir with grand halls and a harem. We will also see Char Minar, a gate of an ancient madrassa long time gone. It was built in 1809 and has more in common with Indian art styles than local. Free afternoon. Dinner inside a 17th century madrasa with a traditional music and dance show. Overnight in Bukhara.

Khiva is an ancient walled city and looks much like it did in centuries past. It is one of the few sites in Central Asia where one can easily imagine life during the time of the emirates. We will spend the morning wandering its maze of ruins and great mosques. Later, a tour of this living museum including the Ichon-Qala gates, Muhammad Amin and Rakhim Khan’s Medressas, Tosh-Khovli Palace, Islom-HujaMedressa and Minaret. Overnight in Khiva at hotel Tuesday

Morning transfer to the airport. End of services